An innovative multivitamin supplement composed of more than 145 natural elements including vitamins, minerals, amino acids and organic fruit and vegetable extracts. This is the only supplement of its kind that provides the vital nutrients* that counteract the typical deficiencies caused by the depletion of nutritional substances in modern diets*.

Notify me when available

Whilst the quantity of our food has increased over the last fifty years, its nutritional quality has deteriorated a great deal. Nowadays it is virtually impossible for an individual to ingest all the essential nutritional elements required for maintaining a fit and healthy body simply through their daily diet*.

A healthy body has the extraordinary capacity to look after and repair itself, but when slumps in performance begin to appear this is accompanied by a feeling of having less energy, a less alert mind, weight gain, greater hunger, less sex drive and sleep becoming fitful etc.. These symptoms may be the prelude to the onset of chronic illnesses that in recent decades have begun to appear ever more frequently and prematurely.

All of these problems are associated with nutritional deficiencies that make the body incapable of operating in the best possible way and so over time it deteriorates until illnesses appear.

FUNCTIONS OF THIS SUPPLEMENT

All of the above has led to the creation of the supplement My Total Health, which contains over 145 essential elements (vitamins, minerals, amino acids and natural fruit and vegetable extracts) which we all need if we are to create and maintain a condition of total health, something that is very difficult to obtain through modern diets.

This supplement contains more than 145 nutritional elements in one single formula, where the synergy of all the combined elements is greater than the effects of the individual elements, as in nature. 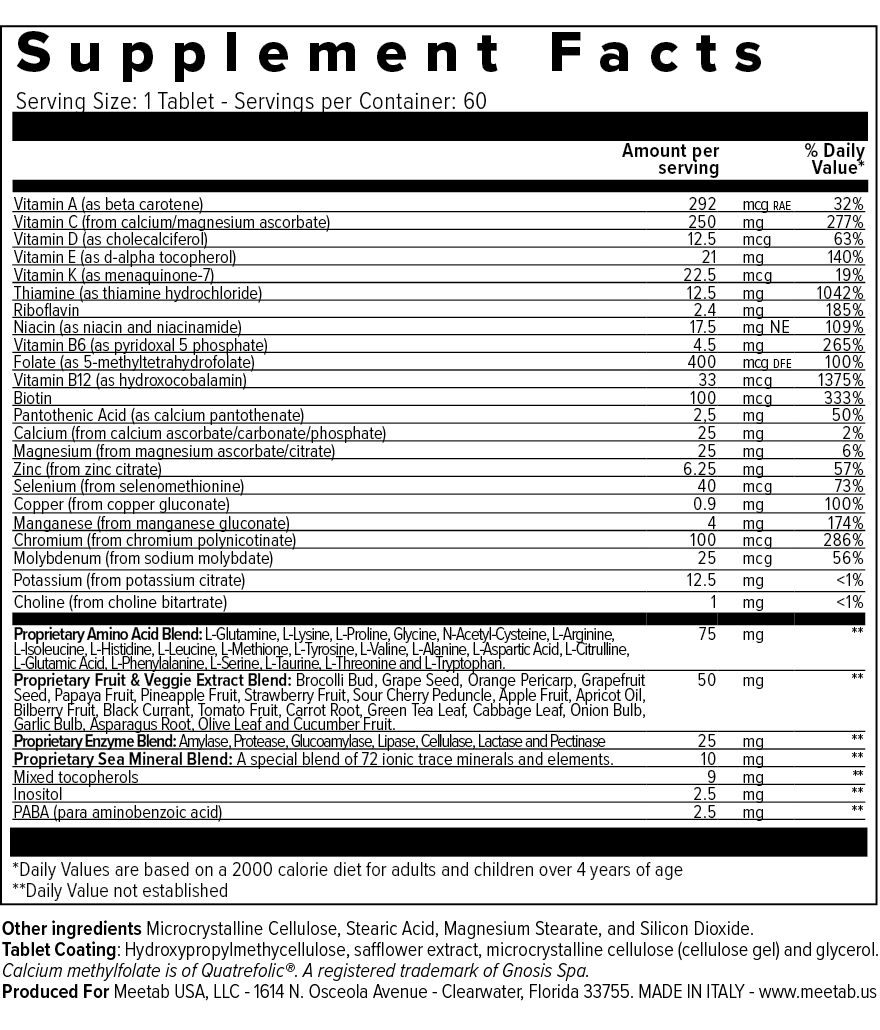 Take 1 tablet a day after meals

Do not exceed the recommended dose without prior medical advice. Dietary supplements are not intended as a substitute for a healthy and balanced diet. For use during pregnancy, breastfeeding or for children under the age of 12 we recommend the advice of a doctor. Keep out of reach of children.

Store this product in a cool, dry place. This product contains no sugar or artificial sweeteners.

Be the first to write your review !

CHECK YOUR METABOLOMIC CONDITION WITH THE TEST. FIND OUT WHAT YOUR BODY NEEDS.